Fire ants are on your pet. Now what?

Just as you may suffer an allergic reaction to one or more stings, your pet can also react to the fire ants’ poison.

Therefore, your first step is to protect yourself from stings by donning gloves.

Next, avoid doing what seems like a great thing to do: bathing your pet or attempting to drown the insects. Fire ants hate water. They show their distaste for it by stinging the first thing that they come in contact with. As you are gloved, that will be your pet.

If you have a flea spray that is approved for use in the species you are treating (i.e.: don’t put dog-only flea spray on your cat!), spray your pet liberally according to label instructions. As most flea sprays contain pyrethrins as active ingredients, the ants should be immobilized very quickly.

Next, starting at the nose, pick off the ants. If your pet has combable hair you can use a fine-toothed comb to help remove more ants quickly. If there are too many mats to comb through, just pick off ants with your fingers.

Reactions to the stings may take the form of pain, itchiness, welts, vomiting, seizures and/or loss of consciousness. Slight discomfort can be handled at home in cool-water baths of antiseborrheic shampoos such as Sebolux, or Episoothe Oatmeal Shampoo, both by Virbac and both available at your veterinarian’s office.

Clearly, more serious reactions require medical intervention and your pet’s doctor is prepared to treat any problems that might arise.

With some knowledge and effort you can eliminate fire ants from your pet’s premises.

Lockley goes on to say that, while there are several effective means of control, eradication is highly unlikely. Furthermore, many products sold are virtually worthless. Some are even dangerous. To wit, “…‘Earthfire’. Quite literally, a flame thrower. It consists of a wand that spurts our a stream of superheated wax that contains the insecticide permethrin. This item is available to anyone who wants it. The U.S. Army tested the device with the thought of using it to control fire ants where they posed a hazard to people and equipment. After undergoing the evaluation, the Army concluded that ‘Earthfire’ was too dangerous for the Army. These are people who have really big guns and weapons of mass destruction and a device that is readily available to civilians was thought to be too dangerous for our armed forces!”

Effective means of control, however, include Lockley’s “drench method, “Simply mix any insecticide labeled for use in your yard (at the lowest rate shown in the label) with water and pour whatever quantity is necessary to saturate the mound. No matter what insecticide you use, the ants will be dead within thirty minutes. The benefit of this method is that you can get rid of the ants almost immediately. The drawback is that you have to locate each and every mound to do a proper job.”

Easiest is his bait broadcast method, “The most common bait available is Amdro. One and a half pounds will cover an acre. The bait consists of a stomach poison (1.5%) suspended in a vegetable oil and coated onto a pre-gelled kernel of corn. The ants will recover the bait within two hours of application and, over time, will distribute the poison throughout the colony. The benefit of this method is that you don’t have to find the ants. The drawbacks are that it’s actually quite difficult to apply only 1.5 pounds per acre and it will take from three weeks to three months to eliminate the colonies. …You need to make at least two applications per year. Spring and fall are the best times. Just make certain that there won’t be any rain or heavy dew within two hours of application.”

“The third method requires the broadcast of a product called “Over and Out“. This pesticide will continuously control fire ants in your yard for up to one year with a single application. It is relatively expensive in the short term but, since it supplies control for such an extended period, it is really quite cheap over the long run. It takes around three weeks to effect control. So, if you need to eliminate a colony that is particularly egregious, you can use the drench method in combination with either the bait method or with Over and Out.”

Follow these steps and you can, at least, push fire ants to the edge of your property line. Coordinate your treatment with neighbors and you can push them further.

Your pets will thank you. 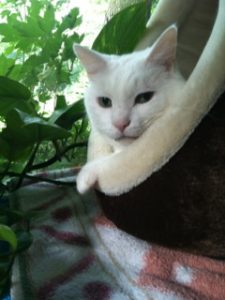